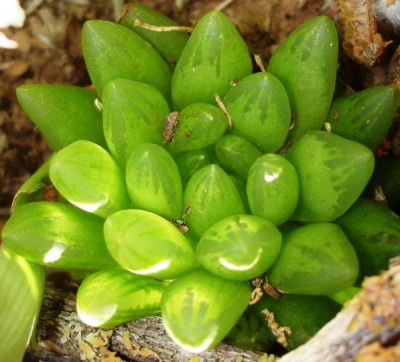 This Little Karoo Haworthia sports a long list of alternative names and also much variation in its appearance, especially in terms of toothiness and translucence. Maybe its list of names is longer because of the variations in physical forms evolved in response to different conditions prevailing in parts of its distribution area.

The earliest recorded name of a species is normally retained officially, whilst the synonyms acquired thereafter merely indicate a history of descriptive and otherwise distinctive identifiers chosen by people unaware of earlier contributions. Our body of knowledge of nature is a continual work in progres,s improved upon vastly over the last few centuries, but never to reach completion; always to keep some people happily busy.

Forms, subspecies and variations of the same plant may be bewildering both on record and in physical attributes. Its names reflect elements of reality, of adjustment to variable conditions and survival challenges found intriguing by somebody that focused upon the species for a time. Observation, understanding, utilisation, folklore and misinformation create a patchwork of human experiences around every species that ever kindled human interest.

More recently the intention of knowing and recording every living thing in an integrated system was adopted. This system will say something about everything and quite a bit about humanity. Recording capitalises on sporadic informative, but also contradictory and disjointed renditions of the continually growing body of knowledge. Thus always containing its elusive shadow of human error. Refined and sometimes corrupted by many efforts, individual contributions build libraries like bees build honeycombs, each with limited individual capacity and opportunity.

Humans take pride in their individuality, their personal identities reflected in their roles in society; but their institutions are collective, crowned by their knowledge, the sweetness of their collective effort, the fruits of their brains.

Many interested people study and build towards completion of a task that can never end; firstly because there is more to nature than we can know and thirdly because although we are making the task easier by killing off species at an alarming rate, our survival to complete the task depends on the diversity , secondly because nature is forever renewing it with incomplete access to the literature that exists on the plant.