Home » GENERA G-H » Haworthia » Haworthia species
Back to Category Overview
Total images in all categories: 9,573
Total number of hits on all images: 4,302,276 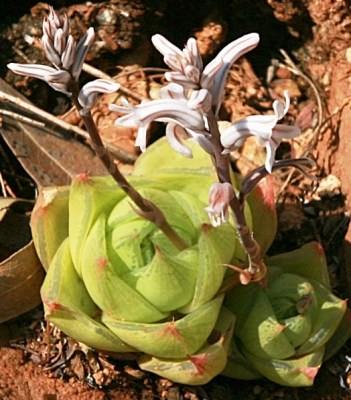 Although many haworthias have dark, hard or leathery leaves, often with white spots or tubercles on them, others have soft, fleshy, even translucent leaves, like the specimen in the photo. They belong to a genus of many species, subspecies and varieties, related to the aloes. The flowers are zygomorphic, i.e. the flower has an irregular shape of petal arrangement like the pelargoniums.

A. J. A. Uitewaal of Amsterdam has been named as the most important European researcher into the naming of Haworthia species. He has published extensively on the subject up to 1951 (Scott, 1985).

Since 1986 there has been an Haworthia Society with its own journal, Haworthiad, a biennial show and a focus on selected plant genera of Astrolaba, Bulbine, Chortolirion, Haworthia and Gasteria (http://succulent-plant.com).