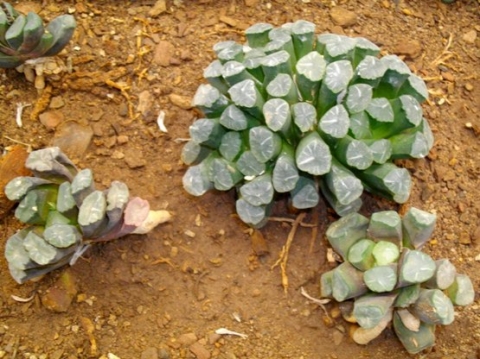 Haworthia truncata var. maughanii is a non-distichous form of H. truncata growing leaves to 5 cm in height. It has sometimes been called been H. maughanii, but that name did not seem to last.

The leaves are arranged not so much in a rosette as in a dome-shaped tuft. The varieties making up the species all display the abrupt leaf truncation seen here, unusual for Haworthia leaves in general. Once they flower there is no doubt, however, about their genus affiliation: the tiny white two-lipped flowers are unmistakable. Flowering happens in early autumn.

It may be that seedlings of this variety also have their leaves in fan-shaped arrangement initially. The leaves are irregularly cylindrical, the leaf tips translucent for the well-known "internal" photosynthesis in window plant leaves.

White lines, curiously resembling clock dials appear on most of the leaf tips in picture, as well minute tubercles not visible in the photo. This variety is distributed slightly more westwards, around Calitzdorp towards Ladismith, than the distichous varieties of H. truncata (Scott, 1985).