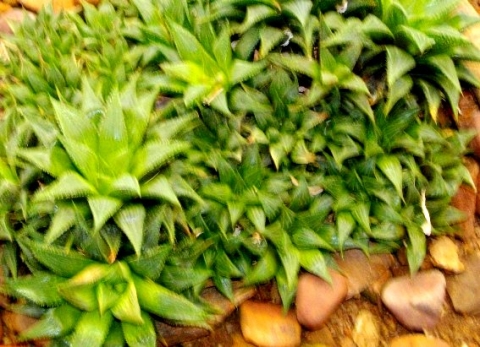 The broad, thick and short leaves curve out and taper to acutely pointed tips. The translucent windows in the upper leaf surfaces have longitudinal lines, pale and parallel across them. Tiny, whitish marginal and surface spines are present. Flowering happens late in winter, sometimes also in early spring.

The distribution is small, near Heidelberg and Riversdale in the Western Cape, a noted subpopulation associated with a farm called Melkhoutskraal. The plant grows in limestone soils in fynbos and renosterveld. The variety is considered to be endangered in its habitat early in the twenty first century.

The name may be as endangered as the plant. H paradoxa was a species name once, now discarded. This variety was also placed in H. maraisii and H. magnifica by different authors in the past (Scott, 1985; www.haworthia.org.uk; http://haworthiaupdates.org; www.redlist.sanbi.org).