Home » GENERA G-H » Haworthia » Haworthia parksiana
Back to Category Overview
Total images in all categories: 9,573
Total number of hits on all images: 4,302,226 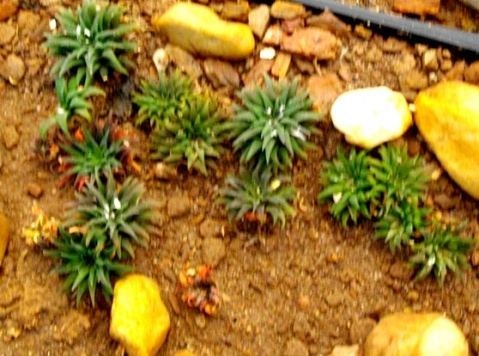 Haworthia parksiana is a stemless leaf succulent that forms clumps. Its small leaf rosettes reach only about 2,5 cm in diameter; the plant said to be the smallest haworthia.

The leaves are ovate to lanceolate, their acute tips recurving. These young rosettes in cultivation in the photo vary in colour from blue-green and dark green to dull grey-green and yellow-green; in nature, they are often dark. Tiny tubercles are scattered along the leaf surfaces. There is a centrally positioned keel in the upper part on the lower surface. Leaf dimensions are 20 mm long by 7 mm wide and 3 mm thick.

The inflorescence is unbranched, 23 cm tall. The lax raceme of 6 cm carries only about five flowers. The spirally arranged flowers open one at a time, starting with the lowermost one. This prolongs the time period in which favourable conditions might ensure the setting of seed; simultaneously serving lunch to the valued pollinators for the longest possible banqueting season.

There are green keels on the perianth segments, commonly referred to as the petals of the flower. The six segments arranged in two whorls of three each, form a laterally symmetrical or two-lipped flower. Segment tips recurve (curve out). There are six stamens inside the funnel-shaped segment tube. Flowers are often less noticed in Haworthia than the leaf rosettes. Still, the small flowers are worth close inspection. Flowering happens early in the fall, not the time of this photo.

The species distribution lies at the coast in a very small area from the Great Brak River to Mossel Bay. The plants grow in short scrub, lichen and moss; difficult to spot when they are not in bloom.

Urban and industrial development, major roads including significant recent ones, holiday making and invasive plant species have proven detrimental to habitat retention. Maintaining species population numbers has not been possible, rendering the plant critically endangered in its habitat early in the twenty first century. Plant collection has also been and probably still is a contributor to reduction of these plants in habitat (Scott, 1985; http://haworthia-gasteria.blogspot.co.za; www.redlist.sanbi.org).