Home » GENERA G-H » Haworthia » Haworthia mucronata
Back to Category Overview
Total images in all categories: 9,580
Total number of hits on all images: 4,309,522 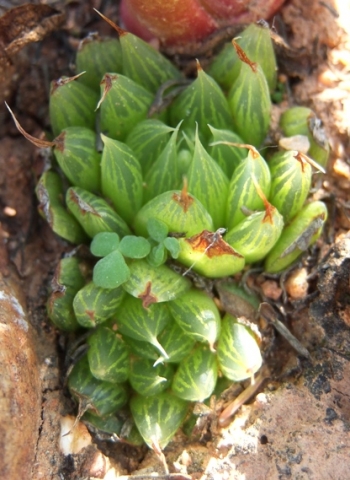 Haworthia mucronata is a stemless leaf succulent growing a single leaf rosette or several of them in a clump. The upper rosette of the pair in picture has just begun a flower stem from its centre.

Small, white, six-tepalled and two-lipped flowers will be spaced along the slender raceme, characteristic of flowers of the Haworthia genus. The inflorescence may nearly reach 40 cm in height, each flower stalk subtended by a membranous bract. The tepals or segments have grey-green keels. Six stamens are present in each flower, occurring in two lengths, positioned inside the perianth tube.

The translucent dark parts on the otherwise emerald leaves are windows for sunlight to penetrate, allowing photosynthesis in cells lower down on the inside of the leaves. Leaf tips attenuate to soft, spine-like projections, white when live, but mostly shrivelled, brown and dry in the photo. These thin and long leaf tips earned the plant its specific Latin epithet of mucronata, mucronate meaning ending in a sharp point.

H. mucronata is endemic to the Little Karoo. The south-western Cape is home to most of the about 140 Haworthia species; they all grow in southern Africa, some beyond the South African borders in neighbouring countries including Namibia, Angola, Zimbabwe and Mozambique (Scott, 1985; Vlok and Schutte-Vlok, 2010).