Home » HABITAT » Habitat diversity » Euphorbia ingens in habitat
Back to Category Overview
Total images in all categories: 11,523
Total number of hits on all images: 6,605,290 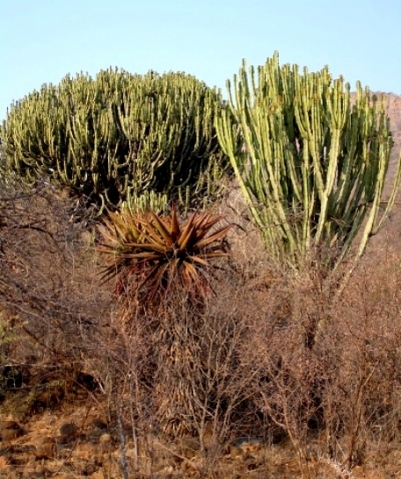 The difference between the older Euphorbia ingens tree at the back with its spreading crown of dense erect stems and the younger one in the foreground is a matter of both shape and mass. The sap-laden stems show a remarkable uniformity of shape that branches in much the same way as it grows, achieving eventually the balloon-shape characteristic of mature trees of this species. Just imagine the sheer mass of such a tree in its prime.

Here they consort with a couple of mature Aloe marlothii plants and some leafless thorny shrubs in a winter bushveld scene. Many plants in this habitat are now at rest in this summer rainfall environment. The nights become cold, but day temperatures will still convince animal and human passersby to use the respite on offer in the substantial shade of these trees, if the spines on the surrounding shrubs will allow. Ticks and other insects are notably fewer than in summer.