Home » HABITAT » Habitat diversity » Edmondia pinifolia where it may escape fire
Back to Category Overview
Total images in all categories: 11,538
Total number of hits on all images: 6,617,829 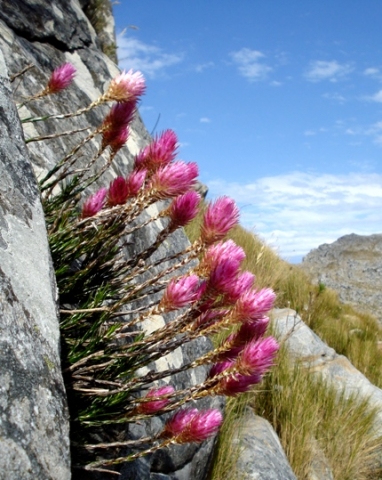 Edmondia pinifolia is a resprouter after fynbos fires; the multiple stems suggesting a woody underground base. A plant elevated in a rock crevice like the one in picture may even be spared incineration. That is if the plants below don’t burn too fiercely like when they are still short, or the momentary whim of the wind is favourable.

Some citizens hurt in sympathy with the destroyed plants and animals living through these sporadic conflagrations. While the destruction and loss are often disturbing, fynbos is dependent on the occasional fire. It serves to destroy woody thicket and deposits nutrients into the often infertile soil. This allows the low-growing species to have their turn to flourish for one or few flowering seasons in the sun. Fynbos has so many species, too many for all of them peaking simoultaneously. The burning cycle serves as a time-share mechanism among the species, keeping them all alive and participating in the mix. Fire also triggers the germination of the seed of certain species. Human activities often bring about fires too frequently, causing erosion, species destruction and other untoward phenomena.

Much has been written without full consensus yet about the ideal fire frequency; different species life cycles suggesting different answers. If people cause no fires at all, nature will follow its own irregular pattern, working just fine. Given today's fragmentation of residual fynbos patches in many places, even that answer doesn’t work perfectly… once nature is interfered with, it responds and not all outcomes are beneficial.

Beneficial is, of course, a human perspective, nature remaining what it is regardless; sure to outlast every short term effect and becoming something new continually. Managers talk about "the art of the possible"; nature lives it, outliving every species through the further evolution of all the survivors in conditions change.

Cause and effect matrices in nature, one big and interactive system, are multidimensional, too complex for people to understand fully. The human mission of conservation is always an incomplete affair, solving and causing problems concurrently and continually as our values and purposes conflict in so many ways. The range of positive actions increases continually through good efforts, but perfection is not for us.

The various inspired causes, custodian or selfish, all based on subsets of incomplete knowledge, inevitably conflict among each other. Meanwhile nature does its own thing while humanity serves and blunders in the downward spiral nature endures in our time.

There are only three species of Edmondia, all endemic to sandstone slopes of the Western Cape fynbos. They are all still surviving both human adoration and destruction fairly well early in the twenty first century (Manning, 2007; Bond and Goldblatt, 1984).