Home » HABITAT » Habitat diversity » Ehretia amoena and crimson-speckled footman
Back to Category Overview
Total images in all categories: 11,921
Total number of hits on all images: 7,169,384 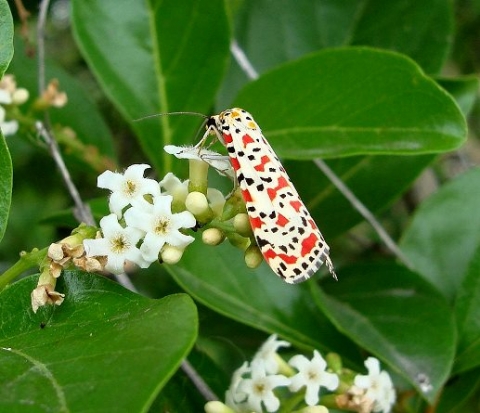 These Ehretia amoena flowers are honoured by a visit from a crimson-speckled footman or crimson-speckled flunky, a moth that is active in full sunlight as well as in the dark. This landing is functional for both parties, food provision and pollination being transactional; the moth probably enjoying proceedings more, but who knows.

Scientifically known as Utetheisa pulchella, the moth has a wingspan from 29 mm to 42 mm. The colour pattern of small black and larger red spots on the narrow front wings is variable, sometimes merged into transversal bands. The colours may serve as warnings to predators, the moths toxic to birds (or to some birds). These moths occur widely in Africa, Asia and Europe, living in grassland, among shrubs and open woodland.

Overwintering may happen either in caterpillar or pupa form, depending on what works in the prevailing climate. The moth’s caterpillar is warty with white lines on the back and sides.

Both caterpillars and moths feed on a diversity of flowers. The moth species is multivoltine, i.e. breeding several generations per annum, the plant fruits annually from late spring to early autumn.

Trust the insects found in many places on earth to be adapted for capitalising on varied opportunities, general practitioners of nature (Pooley, 1993; Wikipedia).