Home » HABITAT » Habitat diversity » Flies and flowers
Back to Category Overview
Total images in all categories: 12,068
Total number of hits on all images: 7,360,733 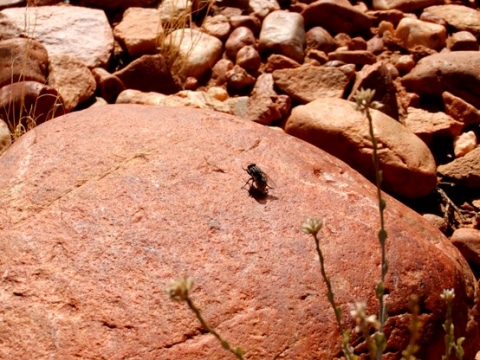 And what is this fly doing by itself in the veld? Aren’t they only a nuisance around people and animals?

Pollination by flies is a big issue in the propagation of flowering plants. Flies visit thousands of plant species regularly. There are enough flies on earth (and so many kinds of them) to make these insects important in plant ecology. Flying around all year in moderately warm climates and up to high elevations increases their importance as pollinators compared to short season insects, particularly for flowers with long and irregular blooming seasons.

Some plants depend completely or largely on flies as pollinators. Even those flies that are not choosy about the flowers they visit may contribute significantly to plant reproductive success and sometimes rival bees in importance.

Pollination by flies varies much in method and the types of flowers they service. Many pollinator flies feed on exposed fluids or eat small solid particles including pollen grains.

“Ordinary” fly pollination or myophily occurs in pale, simple flowers with dull textures that typically do not bloom regularly. Such flowers tend to be shallow in shape with male and female flower parts both well exposed. The flowers often have nectar guides and the nectar easily available. If these flowers are scented, the scent is usually imperceptible.

Hoverflies, often brightly coloured, are among the common pollinators, eating pollen and visiting tubular flowers. Adult flies will feed on both pollen and nectar. Fly pollinated plants include members of families like Euphorbiaceae, Crassulaceae, Brassicaceae and Orchidaceae.

Then there is the other, not so ordinary and less common fly pollinated category, the carrion-fly and dung-fly pollination known as sapromyophily. The word is derived from the Greek words sapros (putrid), muia (fly) and philos (loving).

In this case, putrid flower odours mimic the decaying flesh in which these flies normally lay their eggs. The flies, expecting rotting protein, have no interest in the flowers, but may be caught as most of these flowers have traps to prevent insects from leaving.

Stapelia flower smells may even motivate blowflies to lay eggs in the flowers; not useful to fly propagation, but itinerant flies carrying pollen around among flowers of the same kind a boon to the cause of Stapelia. Nature has many twists and turns: a male blowfly will also ambush its female(s) on a foetid animal carcase for a passionate encounter. The Valentine of the Flies got it all wrong!

Sapromyophilous flowers are typically radially symmetric, have deep corollas or lantern-shaped ones with windows through which the flies crawl in (and are likely to be trapped). These flowers have dark brown, purple or green colouring. There are no nectar guides on the petals, but they are often marked with dark spots, while reproductive organs are generally hidden (Holm, 2008; Wikipedia; http://cactus-art.biz).