Home » HABITAT » Habitat diversity » Euphorbia heptagona keeping its distance
Back to Category Overview
Total images in all categories: 12,068
Total number of hits on all images: 7,363,047 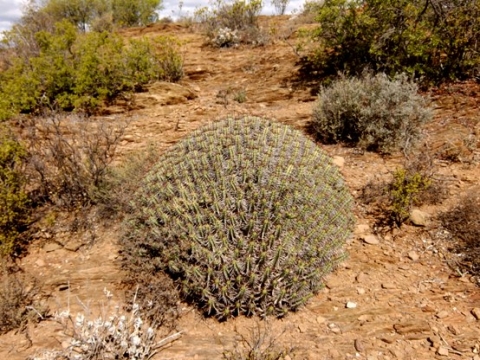 Personal space is a need of living entities. Individual differences may exist in many or most species as to how much is sufficient. People vary individually in how much space they need; they also vary in this need over time: during normal life activities (like eating, sleeping, defecating or mating), during different moods, life stages and who the other party or parties might be that should come hither or move yonder.

Plants grow well and perform well in flower and seed production when they have sufficient space. What that space might be varies for a given species as can be seen on seed packet instructions as to how far apart seedlings should be planted for maximum effect. This will also vary according to soil type, the lie of the land and climatic conditions.

Euphorbia heptagona and its neighbours appear a little standoffish on their Little Karoo shale slope in this photo. If rainwater arrives slowly, it tends to sink among the stony layers and surface roughness gaps, captured to an adequate degree for moisture needs until the next rain. Most of these perennials invest in deep root or taproot growth, to be and receive wherever the water sinks too. All goes better if the roots of neighbours are over there, nowhere too near.

Annuals among them capitalise on their seeds being captured at the end of a windy flight under some of these plants. Their shorter roots will still do the job because they flourish and complete their life cycles quickly after rain, supported in the shady areas where moisture retention is better.

It’s a bit like bigger stands and wider streets keeping the peace, community relations and quality of life better. The naturally gregarious or hooligan youngsters can do their thing according to their nature and disappear or adapt.

But like people, plants also have to cope with varying population density that results from breeding habits in given environmental conditions. If the newly formed top soil and humus resulting from vegetation detritus aren’t removed by rain and wind, more seeds will germinate, leaving less space. All of them always compete for sun and supplies, or succumb to the robust growth and bigger size of the competition from own and other families.