Home » HABITAT » Habitat diversity » Ensemble in a hole
Back to Category Overview
Total images in all categories: 11,921
Total number of hits on all images: 7,169,657

Ensemble in a hole 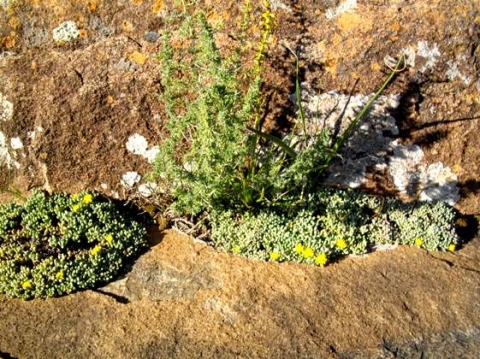 Plants have done what people are trying to do: occupy every habitable spot on earth. The difference being that hundreds of thousands of plant species collectively performed this feat of greening the earth, each contributing in its own inimitable way.

Humanity, however, has done its thing all by itself as a single species. It asked no help from the zoological world, apart from a small percentage of animals that serve as food, workers, pets and curiosities.

Superior in thinking, tool-making, planning and implementation, it took time, but the people are now truly in charge, or often like to believe this. Charging ever faster to a conclusion that looms larger and, incidentally, becomes less attractive the closer we get to it.

Quite an achievement up to a point, this impact of humanity on earth! The point, of course, being the effects that human endeavours have on the rest of the living world. These include: loss of species diversity that puts all at risk including humanity itself, degrading of the environment all have to live in, consuming resources beyond replacement capacity and behaving like greedy and short-sighted hooligans towards all fellow beings in the shared living space… so much for the much-vaunted smartness of human thinking capacity.

Thinking always has the possibility of being carried a step further by the thinking tribe at every obstacle encountered. So watch this space!

In the meantime, all the other species carry on living as best they can, never giving up without a fight. Here asparagus, mesemb and bulb share a couple of rock holes as homes, making a good go of it. Actually, looking heroic.