Home » HABITAT » Habitat diversity » Dry grass diet
Back to Category Overview
Total images in all categories: 12,068
Total number of hits on all images: 7,360,800 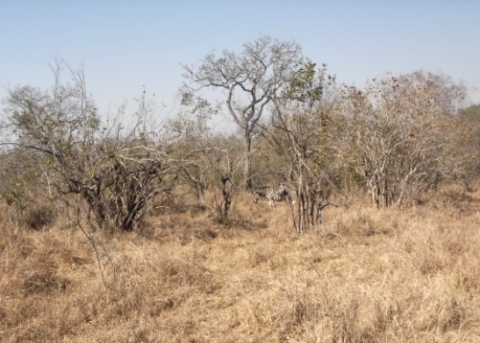 The plains zebra is a grazer thriving on fairly short, green grass. The occasional plucking of a mouthful of leaves in passing from certain trees is the exception that proves the rule.

Winter stops much of the growth, rendering the grass dry and dusty; a time of slimming for inhabitants of the summer rainfall region. The sweet grasses retain some nutritional value in winter although palatability is replaced by hunger in the cold season. Sour grass might fill, but won’t feed in winter as the nutrients then reside in the roots until the spring rains.

Sour grass veld would be shunned by animals in winter if they could choose. Fences bring the responsibility of veld management, because the natural solution, the migration of zebra, wildebeest and other grass consumers across Africa’s open spaces is largely lost forever.

Bushveld such as seen here has a lower game or stock carrying capacity than open grassland. Animals naturally tend to move in smaller herds in this habitat than on the open grassy plains.

The zebra, not a ruminant, digests large quantities of grass in its gut through fermentation and has to drink daily (Fuggle and Rabie, (Ed.), 1983; www.hesc.co.za).