Home » HABITAT » Habitat diversity » Eyes to the right!
Back to Category Overview
Total images in all categories: 11,523
Total number of hits on all images: 6,605,302

Eyes to the right! 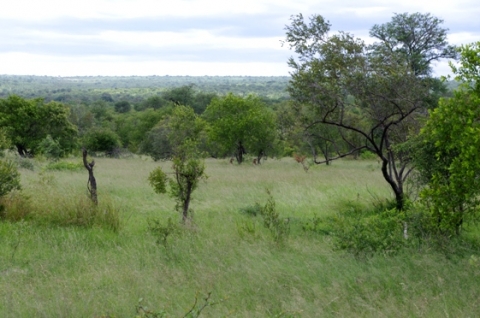 Open woodland is defined in several ways. It is characterised by trees well spaced for the grass around them to be exposed to sun; one definition has it that not more than 20 percent of the terrain should be under trees.

In summer the wooded plains of the game reserves in the Lowveld of north-eastern South Africa present a pretty picture. The grass is already becoming pale here with flowering and seeds being formed in January in the Kruger National Park. The grazers living on a grassy diet are happy with the food quality that still has green blades at this time.

And the carnivores of the neighbourhood are well fed as a consequence too. Two of them, cheetahs, are sitting patiently in the centre of the picture.  Interested in something happening to the right. Maybe food delivery!