Home » HABITAT » Habitat diversity » Fire, the caveman's TV or killer
Back to Category Overview
Total images in all categories: 12,086
Total number of hits on all images: 7,380,836

Fire, the caveman's TV or killer 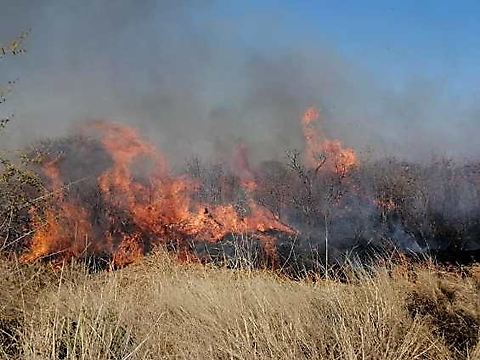 Fire arrived on earth only when the early land-based flora caused sufficient accumulation of oxygen in the atmosphere from emitting it as a waste product. Before plants and their single cell predecessors, there was no free oxygen in the earth’s atmosphere to allow breathing or fire. The earth experienced a Great Oxidation Event.

Atmospheric oxygen levels are linked to the evolved life of the time on earth, as well as to changes in geochemical cycles related to climate variations. The flowering plants of our time came late in a biological history involving only micro-organisms for a very long time.

This change towards freeing of oxygen into the atmosphere began around 2,7 billion to 2,3 billion years ago, becoming significant around 470 million years ago. Oxygen breathers, including our forefathers, came into their own gradually after that, proliferating when oxygen levels increased.

Fossil records of wildfires in the form of plant remains turned to charcoal date back to around 420 million years ago. We can’t quite imagine how fiery devastation of organic material on earth impacted in those early days. There have been times in earth's history when the atmospheric oxygen levels were higher, particularly the Carboniferous Period from 359 million years ago to 299 million years ago, when these levels were as high as 35 percent.

Human imagination may well result in books and movies of what some people surmise happened at times in those days on the younger earth, like Jurassic Park. Or what will happen when the earth finally burns one day, as the sun turns into a red giant enveloping the inner planets... like the story of The Restaurant at the End of the Universe by Douglas Adams.

The historic levels of atmospheric oxygen are closely related to the prevalence of charcoal deposits in the geological strata. In earth’s history the incidence of fire increased with the much later proliferation of grasses, millions of years ago.

Fire has been dangerous to those living on earth long before it became useful to some. It is still dangerous today, in the realities of phenomena like conflagration, napalm and burnt child syndrome, as well as in the minds of people like Dante Alighieri who wrote the Inferno, comprising nine concentric circles of torment located within the earth, and others who sustain mind destinations called hell in many forms, because people tend to be good at such things.

The absence of knowledge causes myth. The common fire usage myth of the ancient Greeks involves the Titan, Prometheus, a lesser being among the gods of those days. He is supposed to have brought humanity the ability to use fire for cooking their food, staying warm, seeing in the dark and forging metal.

The story that grew, and was passed on by generations down to the words written here, involves Zeus, the chief god, becoming angered. He was upset by receiving inferior meat cuts from people's offerings to him, their god, while they were eating all the best steaks themselves.

So, Zeus revoked the people's right to use the fire of the gods that had been initially shared with them, in punishment for their disrespectful behaviour. Forcing the people to eat their meat raw, seemed to be the appropriate lesson to receive from their main god.

Prometheus, bless his kind heart, went and stole fire from Zeus’s personal hearth, returning it to the people a second time. He was known in divine circles to be favourably inclined to people, as he is purported in Greek mythology to have made the first man from clay.

The punishment for this transgression of Zeus’ s ruling was horrible torture. Prometheus was bound to a rock up a mountain where his liver was torn out of his body daily by a giant eagle. The liver was made to grow back overnight for repeated agony during the bird’s next daily meal, to be continued in perpetuity. Look out for this spectacle when next you climb a mountain in the Caucasus, for it is not at all sure whether Hercules succeeded in killing the eagle as was rumoured.

Zeus is supposed to have also retaliated against man for using fire again, by creating the first woman, Pandora. She is the lady whose box is still somewhere, open or shut.

The use of fire brought critically important enhancements to the range of human capabilities. This did much for sustaining and proliferating our forebears over the last million years and more. Even before Homo sapiens became dominant, H. erectus, H. neanderthalensis and maybe other hominin species were able to light and control fires for general use, including in the waging of war against their enemies.

Today, in a more mundane real world, veld fires have to be managed by landowners and the State continually, as too frequent fires (as well as in some vegetations too infrequent fires), harm nature by killing species and reducing biodiversity.

And fires are still being lit from above as well, by lightning. Zeus's bucket of lightning bolts is not nearly empty yet (Bryson, 2005; Wikipedia; https://forces.si.edu/atmosphere; www.livescience.com; https://astrobiology.nasa.gov).