Home » GENERA B-C » Cotyledon » Cotyledon papillaris getting on in years
Back to Category Overview
Total images in all categories: 8,955
Total number of hits on all images: 3,970,434

Cotyledon papillaris getting on in years 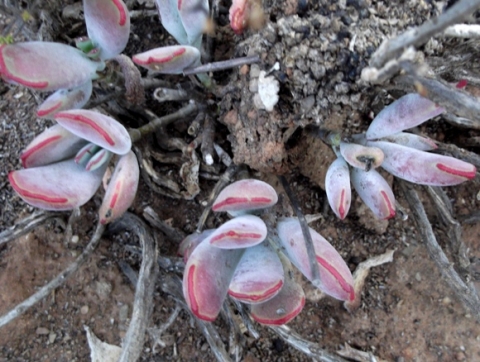 The erect, almost oblong leaves of Cotyledon papillaris present their red leaf tip ridges clearly on this old plant near Montagu. Some red colouring is also notable below the ridges on the leaves at the onset of autumn in March. The white bloom upon the leaf surfaces has become uneven on the old leaves, not much new leaf growth having happened in the dry season now coming to an end.

The individual leaf rosettes appear like separate plants here, the central arena abandoned where first leaves and flower stalks had once flourished. Gnarled remains bear witness to unknown trials and tribulations of the past as life goes on at stem tips.