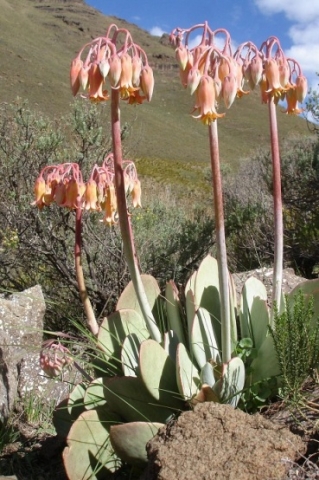 Previous
Image 5 of 25
Next

Yet another face to put to the name Cotyledon orbiculata. This form is thought to be C. orbiculata var. oblonga. The leaves are more white than green; some might see some blue in them as well. The leaf margins are faintly red and their shape is gracefully rounded, although some have distinct pointed tips, breaking the rounding. The leaves are thinner and larger than sometimes seen, growing here among rocks in montane surroundings. The photo was taken in April.

The flowers are pale pink and orange, the early buds similar in colour to the leaves. By the time the flower opens, the perianth is quite long, more than in some of the other variations of this energetically diversifying species. The curved pink pedicels of the flower clusters are gracefully arched above the flowers, allowing them to nod, or rather, to droop.

There is also a narrow, finger-like leaved form of this plant from the Eastern Cape, called C. orbiculata var. oblonga Flavida or grey sticks. Some think that this fingery form is a garden hybrid (iSpot; www.smgrowers.com).