Home » GENERA B-C » Cotyledon » Cotyledon papillaris in the Rooiberg
Back to Category Overview
Total images in all categories: 9,135
Total number of hits on all images: 4,081,207

Cotyledon papillaris in the Rooiberg 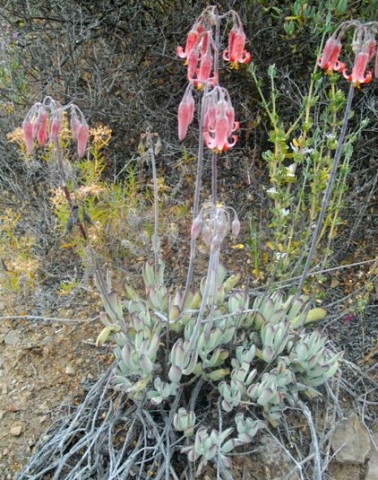 One could have an admired section of a succulent garden devoted just to Cotyledon, especially in the semi-arid parts of the winter rainfall region. Good drainage and ample sun would be important. Specialised collections are widely attractive hobbies among people with a certain mindset. The most cherished items are always the elusive ones, driving motivation in the collective habit.

A few of the same would be good, although monoculture planting has become too common in our times: greenery cultured by humans taunting biological diversity. The owners of such gardens often still profess support for biodiversity as their development projects usurp more land.

Monocultures are common sense in industrial agriculture due to efficiencies in planting, administering of pesticides and harvesting, given that the numbers that must be fed are so vast and growing. Many big flower and ornamental plant gardens increasingly display large sections of the same plant for aesthetic and maintenance efficiency reasons.

The opposite, veld-like garden lacking pattern or plan and resembling nature, may increase in appeal as nature disappears. Too busy for modern business-like gardening solutions, the unkempt juxtapositioning of opposing growth habits are methodically trimmed down to a few select contrasting effects in vogue on the day. The randomness of nature just is not culture! The drivers and cycles of change between nature and its human imitation are still incompatible.

Be this as it may, the succulent garden painstakingly concocted of cuttings and off-shoots requires less watering, a feature welcomed by those fretting over the advancing water shortage.

This plant was found blooming in October in the Rooiberg in the south of the Little Karoo. Its narrow, erect leaves are purple-tipped, growing in opposite pairs. The stout peduncles of the flowers reach heights of only 15 cm to 25 cm. The tubular flowers may be dusky pink, dull red or orange-red and rarely much longer than 1 cm. The often greenish stamens protrude far below the flower mouth.

This form of C. papillaris would not be the one that received the common name of pig ear for its leaf appearance. Unless there are some very funny looking pigs in the Karoo.

The gravelly slope where this plant grows, as well scattered earth-filled cavities among rocks where small colonies of C. papillaris commonly occur in partial shade of bigger shrubs, is a typical feature of the habitat of the species (Manning, 2009; Vlok and Schutte-Vlok, 2010).