Home » GENERA C » Cotyledon » Cotyledon tomentosa subsp. tomentosa in flower
Back to Category Overview
Total images in all categories: 10,861
Total number of hits on all images: 5,525,310 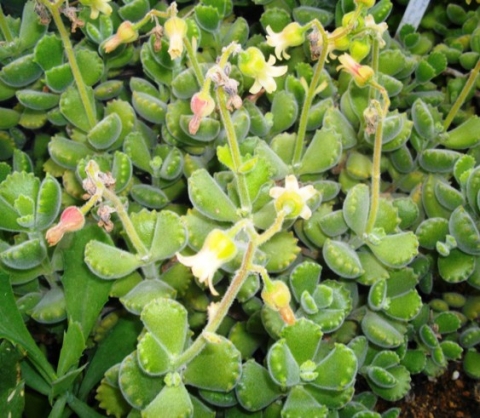 Cotyledon tomentosa subsp. tomentosa, commonly called the wolhaarplakkie in Afrikaans by Van Jaarsveld, et al, (2000), occurs from the Little Karoo to the Baviaanskloof and Gamtoos areas of the Eastern Cape.

The bell-shaped flowers that have a colour range of pale yellow, orange and pinkish can be observed in the picture. The plant normally flowers in nature during spring and early summer. This photo was, however, taken in the greenhouse of the Botanical Garden of the North-West University at its Potchefstroom Campus at the end of April, flowering out of season.

This is one of the useful features of horticulture, especially indoor plant cultivation: Plants may be stimulated to perform beyond their natural seasonal cycle, even look better than ever in nature, in artificially adapted growing conditions. Handy technology for coping with climate change?