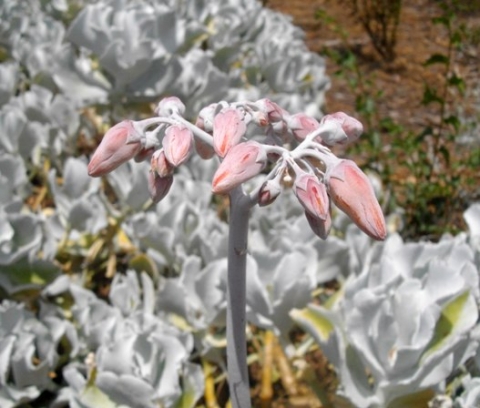 Previous
Image 7 of 25
Next

These pink buds of Cotyledon orbiculata var. orbiculata display the uneven maturation of flowers in the same cluster. The neat clasp of the pointed sepals at the perianth base is clearly in evidence. The pedicels and peduncle are about as white as the leaves in this plant. The whitish bloom that covers the plant also extends to the young flowers here. The plant was seen in the Botanical Garden of Melbourne, Australia.

The generic name of the plant is derived from the Greek word kotyledon or kotyle meaning cupped, hollowed or cavity. This refers to the positioning of the leaves in the basal rosette, which sometimes appear to form a cup-like structure. Orbiculata (Latin) means disc-shaped or flat and round, referring to the shape of (some of) the leaves (Andrew, 2012; www.smgrowers.com).