Home » GENERA C » Cotyledon » Cotyledon pendens, kransklokkies
Back to Category Overview
Total images in all categories: 10,861
Total number of hits on all images: 5,525,341 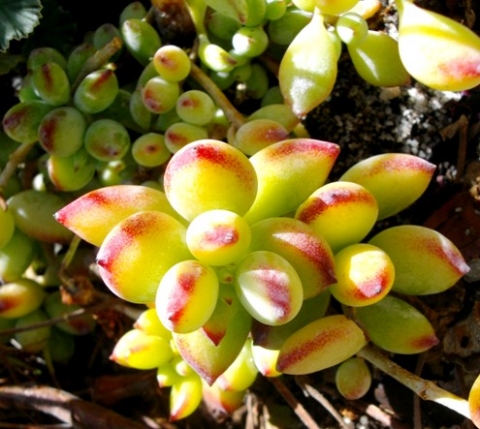 If you have seen Cotyledon pendens in habitat, you have been in nature in the Eastern Cape, exploring the Mbhashe River gorge where this plant is endemic. A rare plant in a small distribution area here in the Eastern Cape, in what used to be the Transkei, this is one of the lesser known cotyledons. In this case, as in many others, the word rare goes with threatened and the requirements of care and responsibility.

The plants hang in drooping mats or curtains of 60 cm long branched stems from sheer south-facing cliffs in an area where more level ground is home to dense scrub.

Flowers grow in small clusters of up to four at a stem tip, suggesting the beads that grandmothers put on crocheted doyleys long ago. The bell-shaped flowers have cylindrical corolla tubes, the calyx with pointed sepal tips clasping only the back end of the tube. The petal lobes recurve, curling right back, exposing the anthers of which there are ten in two whorls per flower. Pollen-laden anthers are yellow, their filaments yellowish green, cohering near the base.

Although the plant has only been recorded botanically early in the twenty first century, there is a descriptive vernacular name in Afrikaans for it, viz. kransklokkies (little cliff bells) to go with cliff cotyledon. There might be a possibility that a name like kransklokkies is an old one, for people see things in nature usually long before scientists do. Unless, of course, it is something like Pluto!

Maybe it is the hot summers of the region that evolved the preference for the more shaded, south-facing riverside cliffs into the nature of the plant (www.redlist.sanbi.org; www.plantzafrica.com).