Home » GENERA B-C » Cotyledon » Cotyledon woodii
Back to Category Overview
Total images in all categories: 9,597
Total number of hits on all images: 4,315,461 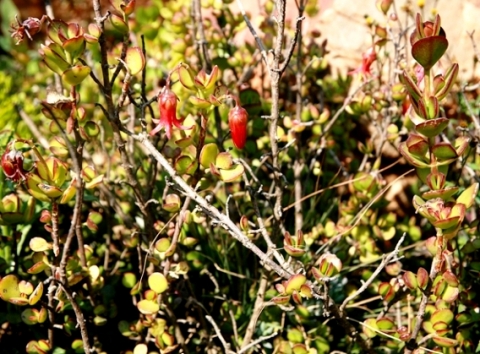 Cotyledon woodii, in Afrikaans known as the rotsplakkie (little rock plaque), is a perennial leaf succulent that may grow taller than 1 m. The plant branches much, producing many slender, but hard, woody old stems that are green when young, becoming brown and peeling.

The distribution lies in the south of South Africa, from Ladismith in the west through the Little Karoo and north of the Swartberge around Prince Albert to the Eastern Cape, east of Port Elizabeth. The habitat is shrub veld on stony slopes and quartzitic outcrops. The plant is also found in sheltered kloofs and wooded ravines, often where spekboom grows.

C. woodii has good qualities as a garden plant, e.g. for rockeries or in (hanging) containers. It grows easily from cuttings and is well positioned in sunny or semi-shaded spots (Smith and Crouch, 2009; Vlok and Schutte-Vlok, 2010; Bond and Goldblatt, 1984).