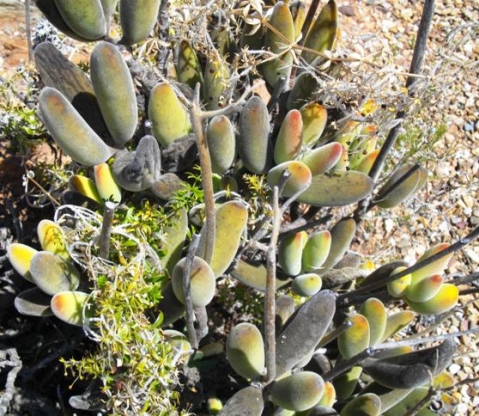 Cotyledon tomentosa subsp. ladismithiensis is a rare succulent from the Little Karoo. The perennial shrublet grows in a limited area south of Ladismith and a few locations near Laingsburg. The other, more well-known subspecies, C. tomentosa subsp. tomentosa, commonly the bear paw, is popular in succulent gardening, both in South Africa and internationally. The two subspecies can be distinguished by comparing the leaves, the size of the plant and the orientation of the flower.

The plant shown here, C. tomentosa subsp. ladismithiensis, branches strongly and may reach 1 m in height (including the inflorescence). The leaves are oblong-elliptic or almost cylindrical (with only one sharp tip or rarely up to three apical teeth), yellow-green and tomentose. These tips are sometimes reddish. The term tomentose means plant hairs that are bent and matted, forming a woolly coating.

The pendulous red flowers resemble those of Cotyledon orbiculata (Vlok and Schutte-Vlok, 2010; http://crassulaceae.net).

(whereas the other, tomentose subspecies flowers mostly are not pendulous)
Hits
2163
Photographer
Thabo Maphisa
Author
Ivan Latti
Back to Category Overview