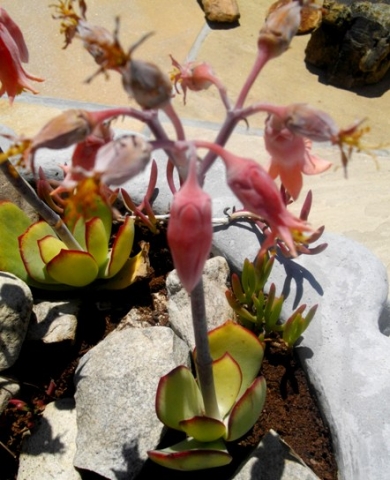 Previous
Image 8 of 25
Next

The form of Cotyledon orbiculata var. orbiculata, in Afrikaans the hondeoor (dog's ear), found in the southern Overberg region is often not nearly as big as the recorded "normal" size of 1 m. Close to the sea on dunes or in rocky scrub the smallish plant does well, flowering all year and easy to find on many sites.

The erect, red-rimmed leaves display a mixture of green, yellow and grey hues with some seasonal variability. Leaf size is also smaller than some other forms of the plant. The pointed leaf tips remind of a Middle Eastern architectural feature.

The clasp of the pointed calyx, coloured the same as the corolla, is clearly displayed on some flowers in the photo. Note the characteristic shapes of bud, open and fading flower (Mustart, et al, 1997).