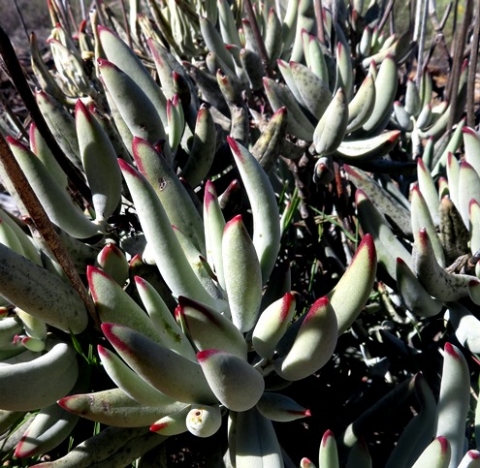 Previous
Image 4 of 25
Next

These almost terete (cylindrical) Cotyledon orbiculata leaves were seen near Springbok in Namaqualand. The very variable C. orbiculata plant will spread low branches in the open, elongate tall ones in thicket; adapted to many living conditions and showing it in shape and colour.

The succulent leaf bodies are a bit like slender seals, erect in searching the sky for the source of a smell that tickles their purple-red noses. The common name of finger pig’s ear exists, as well as the formal one of C. orbiculata var. dactylopsis. The Greek words, daktylos, meaning finger and -opsis meaning appearance tell the story.

The fleshy inside of a C. orbiculata leaf is sometimes applied by people to soften and remove hard corns and warts.

In Namaqualand it is known as the pêpêbos (pêpê bush), an onomatopoeic name referring to the flower stalk used as a flute by hunters to make a sound, pêpê, resembling the call of the young klipspringer. This sound attracts klipspringers, making them easy prey (Le Roux, et al, 2005; iNaturalist; http://pza.sanbi.org).