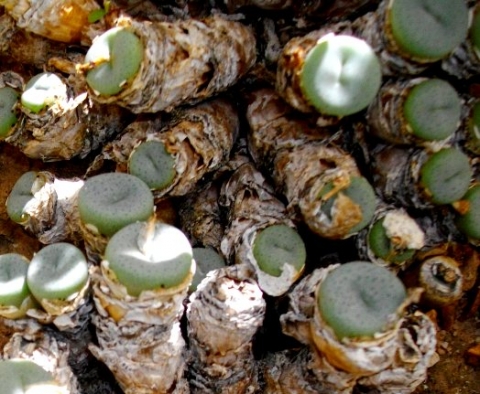 The tiny, translucent dots called idioblasts are modified cell groups. They perform the same function as leaf windows in other succulent species. Here they are only separated into many small, scattered windows, letting in sunlight for photosynthesis in cells on the inside of leaf-body walls.

The somewhat flat leaf-body top may be slightly concave, the central fissure or slit occasionally having a dark margin.

The gnarled old stems below the leaf-bodies are thick and worn, carrying dry leaf remains of earlier years of determined living. Still, the clump is tiny, even in old age only a couple of centimetres tall.

In flower the short purplish petals grow from an erect green cylinder at the flower base; the flower centre is yellow with clustered anthers. Flowering happens in autumn lasting into winter when the plant responds to rain by winter growth.