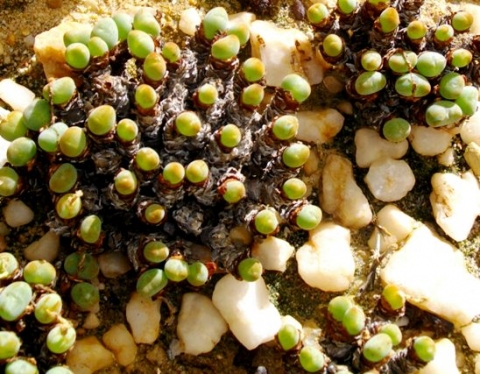 These clumps of leaf-bodies of Conophytum velutinum subsp. velutinum show what they look like in winter on “exposed quartzite flats”, one of their typical environmental settings.

Spaced by some old leaf debris, dry stem material and succumbed leaf-bodies of past years, the green round “marbles” or ovoid bodies show the tiny leaf-top slits through which flowers and new leaf-bodies appear seasonally. Some bodies in picture have a brownish discolouring on top, especially those in the centre of the clumps.

The subspecies is not considered to be threatened in its habitat early in the twenty first century although it is rare, growing in only a few subpopulations in the Komaggas area in Namaqualand, Northern Cape (www.redlist.sanbi.org).