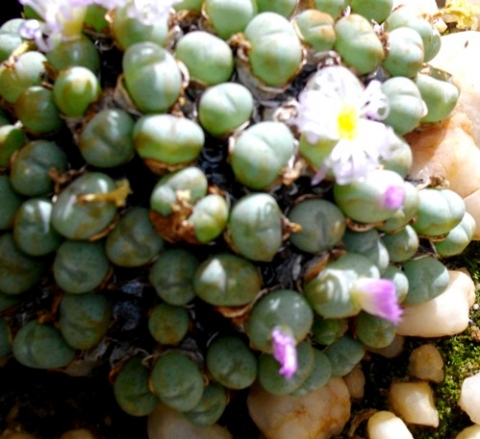 Conophytum velutinum subsp. polyandrum is a dwarf leaf succulent growing a clump of paired leaf-bodies at ground level. A narrow slit at the top of the leaf-body only partly separates the two rounded pale green to grey-green leaf bulges, sparsely covered in tiny dark dots.

The flower has soft pink to violet petals, white at the base, growing in about two whorls around the stamens. The cluster of stamens, each topped by a yellow anther, has short, erect filaments. The flowers are nocturnal, appearing during autumn.

Only found in a small part of Namaqualand, the subspecies is considered rare, but not threatened in its habitat early in the twenty first century, due to being common locally although range-restricted. The habitat is succulent Karoo vegetation on rocky outcrops at elevations from 300 m to 540 m. Not all sources in the literature recognise the two subspecies of C. velutinum (Cowling and Pierce, 1999; Smith, et al, 1998; http://llifle.com; www.redlist.sanbi.org).