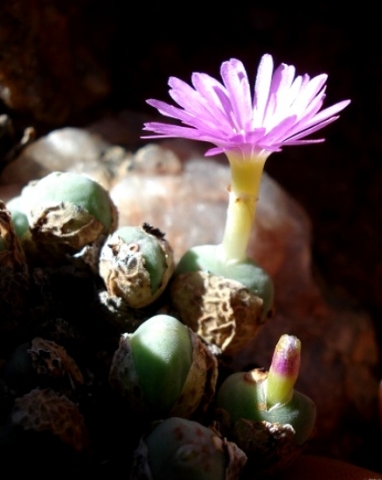 The flower of Conophytum velutinum subsp. velutinum emerges from the slit between the two cylindrically fused parts of the leaf-pairs. It sends up an erect creamy white to faintly green tube formed by the petals that are attached to each other from the base. On its bottom half the tube is covered in similarly coloured thin sepals, the tiny brown tips of which are discernible halfway up the tube. Where the petals become detached from each other, they assume the bright colour of the corolla top and spread open into a shape like a salver. The emerging bud shows this pink-purple colouring already, as well as some green below that will turn white later.

Note the wrinkly paper-like husks of the old leaves from the last growing season that remain on parts of the leaf surfaces at this stage (Smith, et al, 1998).