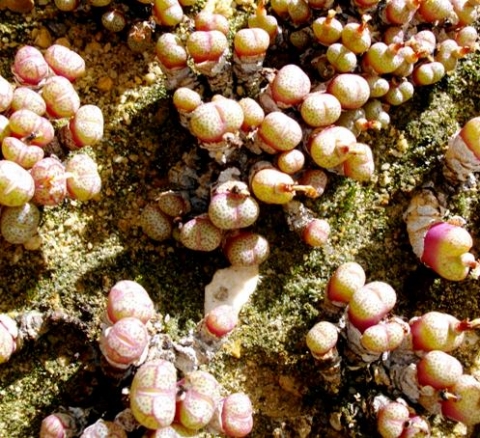 Identified as Conophytum truncatum subsp. truncatum, this plant cultivated at the Karoo Desert National Botanical Garden has the added differentiation in its identity of being a variety within the subspecies, called var. wiggettiae.

Clumps of rounded, paired and fused leaf bodies, elongated opposite the central slit, have achieved some height from the short stems gained over seasons of growing earlier leaf bodies.

Flowering for the season is done, the rest season setting in. The pale beige leaf surfaces, short in chlorophyll, are covered in scattered brown dots, as well as some keel lines perpendicular to the leaf body slits. The bottom halves of the succulent bodies are reddish purple and dotless above the parts covered in old leaf skins.

The younger leaf bodies surrounding the main ones, replicate in miniature the colours and shapes of their elders.