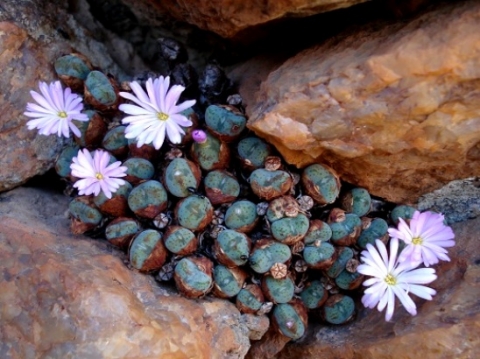 The flowers of Conophytum velutinum subsp. velutinum may also be as pale as seen here. This specimen was observed flowering in April, not far from Kommaggas where it grows ensconced among rocks. This habitat is home to a large number of Conophytum species, let alone other mesembs and succulents.

The old leaf husk remainders around the pale green leaf bodies are brown in this case. The leaves of this plant have the scattered dark green spots, familiar among several Conophytum species, whereas some other photos in this Album show them to be spotless. Some fruit capsules with five locules are also visible (iSpot).