Home » GENERA C » Conophytum » Conophytum violaciflorum
Back to Category Overview
Total images in all categories: 11,793
Total number of hits on all images: 6,942,215 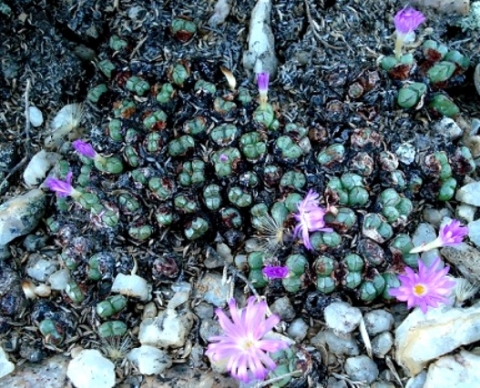 Conophytum violaciflorum is a dwarf succulent that grows a dense clump of two-lobed leaves, oblong to cylindrical in basal shape and erectly positioned. The lobes may have maroon rims on their angular margins. Leaf surfaces are pale green, often with scattered tiny dark green spots. A few scattered flowers are open on this mature and spreading clump. Some relics of old leaves are stuck in the grooves among the succulent leaf bodies.

Although the plant is endemic to a small distribution area in and near Springbok in Namaqualand, it currently has a stable population in nature and not considered threatened early in the twenty first century (Smith, et al, 1998).