Home » GENERA C » Conophytum » Conophytum wettsteinii
Back to Category Overview
Total images in all categories: 11,793
Total number of hits on all images: 6,942,192 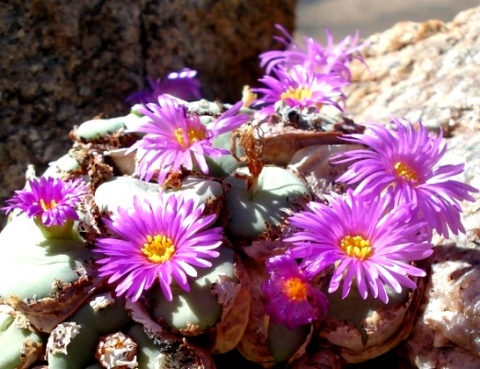 These aromatic pink flowers of Conophytum wettsteinii grow from the centres of the fused leaf-pairs in true Conophytum style. The blooming occurs from midwinter, when this plant was photographed, until the middle of spring.

Aizoaceae flowering patterns vary much and in interesting ways: This species is one of the winter and spring flowering ones. The majority of Conophytum, one of the many genera within the Aizoaceae family, flower in autumn, before or at the onset of the rainy season. Individual flowers of C. wettsteinii are long-lasting, unlike some Aizoaceae flowers that depart within days.

The flowers seen here open in daytime, unlike some Conophytum species that open only at night or at dusk (C. burgeri flowering for an hour at sunset). There are also cases of Conophytum flowers not opening at all, as in the case of C. rugosum that is self-fertile; a condition known botanically as cleistogamy (marrying oneself?).