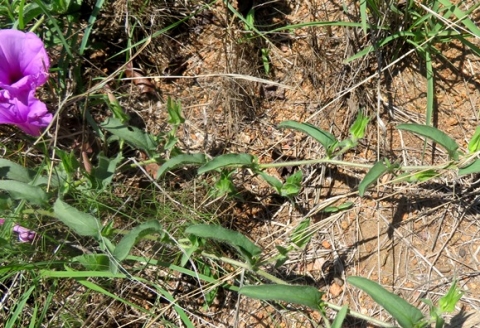 Previous
Image 8 of 20
Next

Ipomoea crassipes subsp. crassipes, sometimes called one-day flower (as are some other members of the genus), is a perennial with trailing annual stems growing to 1 m from a perennial, tuberous rootstock. The stems are green or purple. Most plant parts are softly hairy.

The leaves are simple and unlobed, variable in shape, ranging from ovate to lanceolate, sometimes cordate (heart-shaped). They grow on longish stalks and are sometimes purple upon their margins.

The solitary flowers have characteristic leaf-like bracts around their calyces comprising unequal sepals. Flower colour is mauve, magenta to pinkish purple, rarely white with a dark purple throat. The corolla is funnel-shaped, its lobes spreading in a circular shape, the triangular patches where the petals join sometimes paler in colour. The flower is from 3,5 cm to 6 cm in diameter, its tube 3 cm to 4,5 cm long.

Each flower lasts for a short time only. Flowering happens throughout the year excepting winter; the season shorter in some parts of the species distribution.The fruit is an ovoid, dehiscent capsule of about 1 cm in diameter.

This plant occurs widespread in the east of South Africa from the Eastern Cape to Limpopo and North West, also widely in  tropical Africa.

The habitat is grassland and disturbed areas. The subspecies is not considered to be threatened in its habitat early in the twenty first century. This is the only subspecies of I. crassipes occurring in South Africa.

The tuberous roots are eaten, while some plant parts feature in a variety of traditional medicine applications (Manning, 2009; Pooley, 1998; Van Wyk and Malan, 1997; Germishuizen and Fabian, 1982; iSpot; JSTOR; http://redlist.sanbi.org).