Home » GENERA I-L » Ipomoea » Ipomoea bolusiana
Back to Category Overview
Total images in all categories: 11,905
Total number of hits on all images: 7,155,773 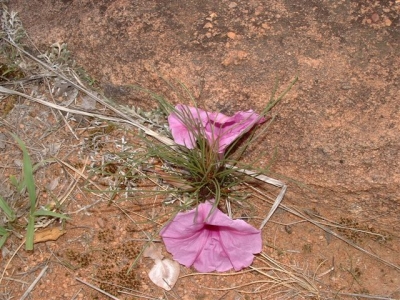 The ipomoeas belong to the Convolvulaceae family. The Ipomoea species Ipomoea bolusiana, I. bolusii and I. holubii all seem to have pink flowers, large caudices and (sometimes) narrow leaves. This one, photographed in the Waterberg raises some questions.

I. bolusiana has its narrow leaves dissected into three to nine about linear segments radiating out from a distinct stalk, or sometimes simple and apparently stalkless, spaced up the stems. The stems grow from a fusiform or spindle-shaped rootstock. In picture linear leaves seem to grow in a tuft from the base.

I. bolusii often has a large rounded caudex protruding partly above-ground. Not all caudices are visible above ground, but I. bolusii does not occur in South Africa, so it can be ruled out.

I. holubii (previously Turbina holubii) has more rounded to heart-shaped leaves, clearly different from the plant in picture and also ruled out.

I. simplex with narrow leaves may also be found in the area where the plant was seen. It usually seems to have white flowers.

There may be other possibilities. On balance the most probable identity is I. bolusiana. Its broadly funnel-shaped flowers may be mauve, purple or pink, darker in the throat. No subspecies of this plant are recognised as in the past (Manning, 2009; Van Wyk and Malan, 1997; Germishuizen and Fabian, 1982; iSpot; http://redlist.sanbi.org).