Home » GENERA I-L » Ipomoea » Ipomoea magnusiana
Back to Category Overview
Total images in all categories: 11,656
Total number of hits on all images: 6,771,202 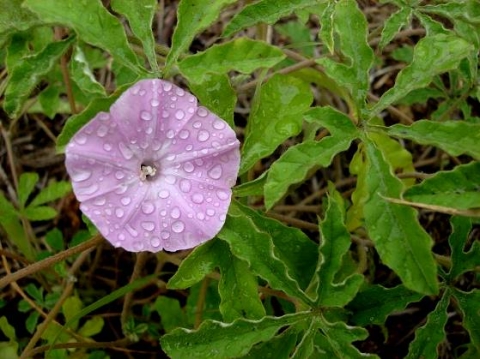 The leaves are deeply incised into three to seven digitate lobes, sharply to bluntly pointed. The lobes have wavy margins that are entire and curving or folding in laterally. The variably green leaves are sparsely hairy above, white-woolly on the lower surfaces. Yellow hairs are present along the main veins. The leaf size is from 6 cm to 11 cm in diameter.

The species is widely distributed over the northern parts of South Africa, in all but the two southerly provinces as well as in southern Africa.

The habitat is grassland, clumps of bush and woodland. The species is not considered to be threatened in its habitat early in the twenty first century (Pooley, 1998; Van Wyk and Malan, 1997; iNaturalist; http://redlist.sanbi.org).