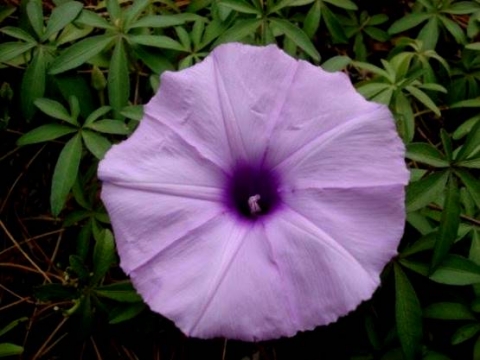 Previous
Image 5 of 20
Next

Ipomoea cairica, commonly known as the mile-a-minute vine, Messina creeper or Cairo morning glory, is a perennial, a vigorous climber. Growing from a tuberous root, its numerous, long, slender branches serve as a coverall, even a suffocater of neighbouring plants. The specific name cairica means from Cairo.

The long-stalked leaves are palmately lobed or deeply incised in an overall circular shape, from 3 cm to 10 cm in diameter. There are leaf-like pseudostipules present (bracts or leaflets near the leaf stalk, not quite stipules or possibly exactly that).

The pale mauve, spreading corolla turns dark in the throat of its narrowly funnel-shaped tube. The flower is about 4 cm in diameter. Flowering happens from late summer to after mid-autumn. The fruit capsules are about 1 cm in diameter.

The species distribution is widespread in the east of the country, Eastern Cape, KwaZulu-Natal, Mpumalanga and Limpopo. It is much more widespread beyond in Africa, around the Mediterranean and as an introduced plant now rambling as a weed in Australia, the USA and probably further.

The habitat is riverine bush and disturbed land. The species is not considered to be threatened in its habitat early in the twenty first century.

This plant is cultivated by some, eradicated by others. It is used in traditional medicine, also in some funeral rites, maybe when the medicine did not work. Monkeys eat several of the plant parts (Pooley, 1998; Onderstall, 1984; iNaturalist; http://redlist.sanbi.org).