Home » GENERA I-L » Ipomoea » Ipomoea oblongata
Back to Category Overview
Total images in all categories: 11,905
Total number of hits on all images: 7,155,650 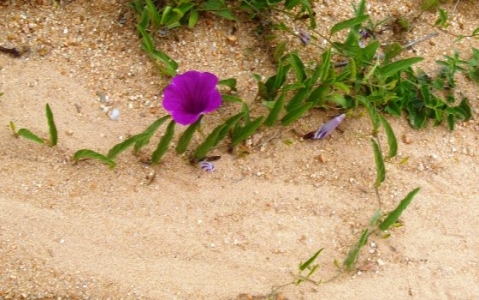 Ipomoea oblongata is a creeping perennial with strong stems of up to 2 m long that may either be hairless or bristly. They grow annually from a large root, a perennial, spindle-shaped tuber, tapering at both ends from a thick central part.

The leaves in the photo are alternate and spaced, standing erectly upon their stiff petioles. The leaf shape is narrow and oblong, folding in along the midrib, the margins wavy, entire and ciliate, i.e. fringed with hairs. Leaves are variable in shape, sometimes elliptic with hairiness variable upon the stems, leaf blades and stalks.

The flowers grow from leaf axils, solitary or in clusters. The flower has a funnel-shaped magenta corolla, up to 7 cm in diameter. The style has spherical lobes inside the corolla throat. Around the corolla base the sepals are ovate or lanceolate, not all quite identical. The peduncles or flower stalks are terete (cylindrical), shorter than the leaves. Flowering happens from late spring to early autumn.

The nearly spherical fruit has the stigma base persisting on its tip. The seeds are grey and hairless.

This plant was seen in January in the Kruger National Park. It is found widely in grassland and woodland of the eastern parts of South Africa and subtropical Africa (Manning, 2009; JSTOR).