Home » GENERA I-L » Ipomoea » Ipomoea hochstetteri
Back to Category Overview
Total images in all categories: 11,656
Total number of hits on all images: 6,771,249 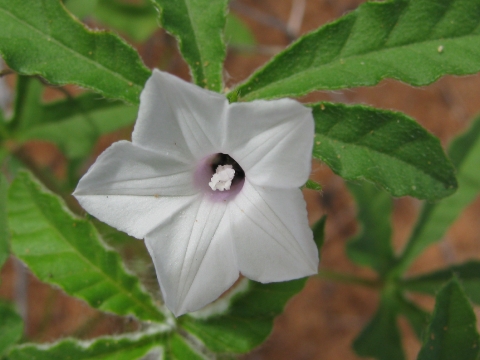 Previous
Image 9 of 20
Next

This plant bearing pinnately lobed leaves is thought to be Ipomoea hochstetteri, an annual, herbaceous climber growing long stems that lie on the ground if there are no supports.

It is sometimes equated to Merremia quinquefolia found in Central America, tropical parts of Asia, Australia and some Polynesian islands, probably not in southern Africa. The five-pointed angularity in the spreading corolla seen here is not present in the more rounded American flower that tends to a creamier colour.

The funnel-shaped white flowers of I. hochstetteri grow in three- to six-flowered cymes. The corollas are purplish mauve on some plants. Flowering happens late in summer and early in autumn.

The pinnately digitate leaves have five, long, oblong to oblanceolate lobes with sunken midribs and ascending, spaced lateral veins. Such leaf-shapes are more common in the Merremia genus (of the Convolvulaceae genus) than in Ipomoea. The soft, bright green to yellow-green leaf lobes or leaflets are sparsely hairy, their margins curving in and out and wavy or straight in parts.

The species distribution is in Limpopo, Mpumalanga and northern Gauteng, apart from a widespread presence in neighbouring countries in southern Africa, as well as further in tropical Africa and India.

The habitat is grassland or mixed bushveld on sandy or loamy soils. The species is not considered to be threatened in its habitat early in the twenty first century.

Ipomoea is a bigger genus than Merremia (500 versus 80 species), represented by 56 species in southern Africa, while there are 9 merremias in the region (Germishuizen and Fabian, 1982; Leistner, (Ed.), 2000; iNaturalist; http://redlist.sanbi.org).