Home » GENERA I-L » Ipomoea » Ipomoea ommaneyi
Back to Category Overview
Total images in all categories: 11,905
Total number of hits on all images: 7,155,676 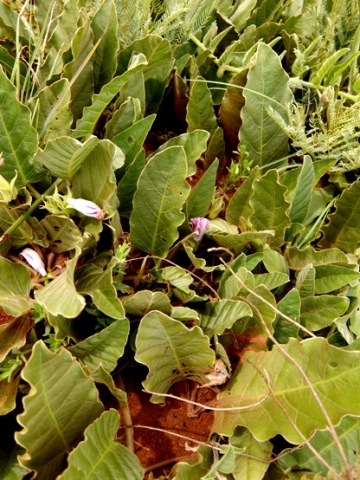 Ipomoea ommaneyi, in Afrikaans known as the beespatat (cattle sweet potato), is an herbaceous plant growing trailing annual stems from a perennial taproot that is large and tuberous.

I. ommaneyi grows in grassland of the summer rainfall areas, particularly the Free State, KwaZulu-Natal and north of the Vaal River, as well as in Zimbabwe and further in tropical Africa at altitudes roughly between 900 m and 1300 m. The species is not considered threatened in its habitat early in the twenty first century.

It has been used as famine food by the Zulus and has also featured in traditional medicine (Van Wyk and Malan, 1997; www.redlist.sanbi.org; www.fao.org).