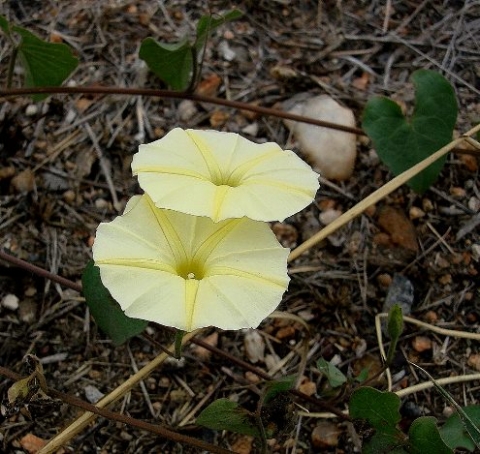 Ipomoea obscura var. obscura, commonly known as the yellow ipomoea, the wild petunia or in Afrikaans as the wilde patat (wild sweet potato), is a perennial growing twining or trailing branches about 2 m long from a tuberous rootstock.

The dark green leaves are heart-shaped, deeply lobed at the base and tapering to the pointed tip. Hairy on both surfaces, there is sometimes also a fringe along the margins.

The pale-yellow or cream flowers grow solitary or in groups of up to three on stalks up to 8 cm long. There may be red colouring in the corolla tube. The corolla is from 1,2 cm to 3 cm in diameter, the tube from 2 cm to 4 cm long. The calyx lobes are 1 cm long. Flowering happens in summer, often over a longer season.

The variety is distributed widely all over South Africa, excluding the Western Cape or near it. The habitat is grassland. The plant is not considered to be threatened in its habitat early in the twenty first century.

The leaves are sometimes cooked as a relish. The plant is used in traditional medicine; it is hallucinogenic (Pooley, 1998; Van Wyk and Malan, 1997; iNaturalist; http://redlist.sanbi.org).