Home » GENERA G-H » Hoodia » Hoodia gordonii before and after
Back to Category Overview
Total images in all categories: 10,855
Total number of hits on all images: 5,508,228

Hoodia gordonii before and after 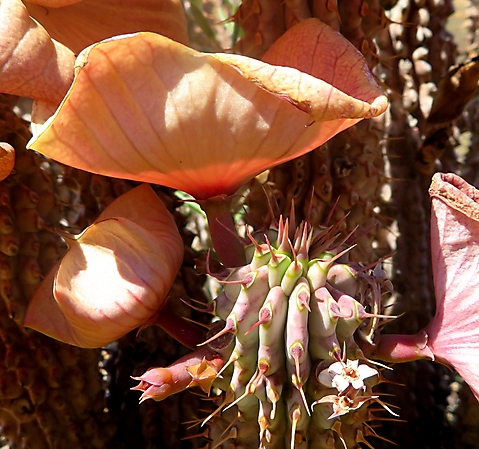 Previous
Image 5 of 24
Next

When the before and after notion is taken to extremes in Hoodia gordonii flowering, the tiny, newly arrived floret is still unusually shaped, the leftovers of the departed flower hardly recognisable.

Sepal blades curve in on the tiny buds when corollas are still to materialise. Two old calyces show themselves, one white and still star-shaped, the other brown and losing shape. They are both bare at the end of their cycle, devoid of all the upper floral parts.

On the visible corollas in picture, the intermediate developmental stage rightly called flowers, the upper surfaces are coarse compared to the smoothness below. Only the main veins sunken above are prominent on the lower surface, the net-veining recessed above without visible impact below.

Laterally flattened tubercles form the vertical, columnar ridges down the stems. A solitary spine may be present on top of a tubercle, or the tubercle may elongate enough to accommodate several spines, up to four in picture.

Lower positioned spines of tubercles in picture have already dried, their younger mates up top still purple. Still further down the stems the dry spines on tubercles remain for a period, eventually dropping off.

The clusters of shortest spines up top in the centre huddle close together initially, before their tubercles swell out and space them.

A plant is to be admired in the moment as a picture; also as a series of events, a story that unfolds in its own still-life drama (White and Sloane, 1937; Shearing and Van Heerden, 2008; Le Roux, et al, 2005; iNaturalist).