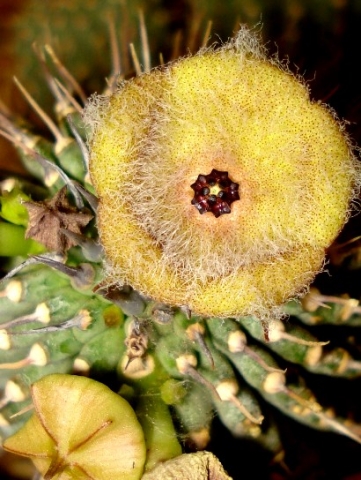 Previous
Image 2 of 24
Next

Hoodia dregei, in Afrikaans the wolweghaap (wolves ghaap), is a spiny, leafless stem succulent that branches at ground level.

The flower is unusual. The inside surface of the open corolla is a flat, creamy yellow disc mottled with tiny maroon dots and patchy tufts of off-white, beard-like hairs. The narrowly pointed tips of the corolla lobes are reflexed down, nearly out of sight from the top.

The closed bud in picture shows a pale cream, striped and hairless outer surface, its lobe tips still cohering in a conspicuous point resembling the spire of a steeple. The glaucous (blue-green) stem tubercles below the flowers are barrel-shaped, whitish from drying out at their tips, a long spine erect upon each of them.

The tiny outer corona in the flower centre, five-lobed and shiny maroon to nearly black, has squarely truncated lobe tips. The pale, even tinier, inner corona right in the centre over the staminal column is also five-lobed, flattened and connected at the back of its lobes to the outer corona; the pollinia to be reached by flies minuscule.

The species has a limited distribution in the Great Karoo north of the Swartberge from Prince Albert northwards to Beaufort West and Merweville, eastwards to Graaff-Reinet. The habitat is arid, stony slopes and flats where extremes of temperature are common.

This rare species is considered to be vulnerable in its habitat early in the twenty first century due to mistaken identity: Collectors and harvesters of H. gordonii, a more common and sought-after species, might take this plant from its few populations known in the Karoo when they fail to spot the difference between the two species. H. gordonii has myth and possibility surrounding it as a potential appetite suppressant (www.succulentguide.com; www.redlist.sanbi.org).