Home » GENERA G-H » Hoodia » Hoodia gordonii many parts protruding
Back to Category Overview
Total images in all categories: 10,855
Total number of hits on all images: 5,508,209 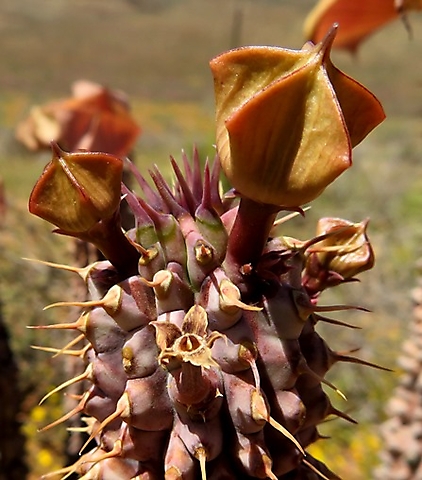 Hoodia gordonii becomes a familiar plant once all the different tips and points sticking out everywhere have been explored.

Foremost in picture are the three flower buds of different sizes, therefore different waiting periods apply until anthesis (flower opening). A bit suggestive of the headdress one might expect upon an old era Russian clerical dignitary, there are five prominent ridges radiating out on every bud, evenly shaped in masterful floral symmetry.

The sharp point at the bud top reminds of the German soldier helmet, the Pickelhaube worn during World War I and before, as if the enemy would conveniently fall from the sky, or fatally, for one or both parties. Alternatively, it may have been useful in a last resort head-butt when all weapons had failed and the lowered head barge has to do the trick.

Other tips on the plant in picture are the purple (juicy) and beige (desiccated) spines on the fat tubercles arranged in columns, i.e. vertically.

Lastly, there is a dry, five-pointed calyx persisting after all else that was floral upon it had dropped off. This old husk still resembles the young calyx parts visible below the three buds in picture, raised on their smooth, cylindrical pedicels, sturdy and purple (White and Sloane, 1937; Shearing and Van Heerden, 2008; Le Roux, et al, 2005; iNaturalist).