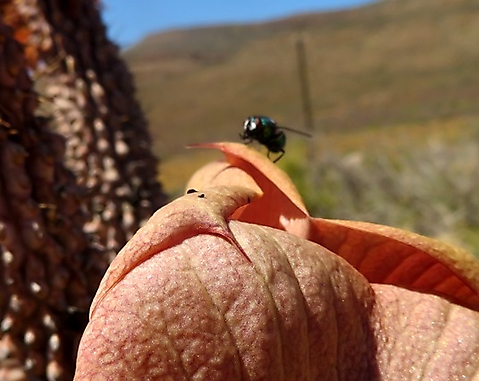 Hoodia gordonii corolla lobe tip protrusions are needle-like. They often go unseen as the flower margin is rolled under. One such spine is caught in the photo over the blade of another flower, while a second indicates the way for the fly, like the white runway line on the tarmac telling the pilot where the aeroplane nose should be aimed.

Close-up, the pale, flesh-coloured corolla blade is uneven from net-veining, as well as from the nearly parallel main, sunken veins originating in the corolla mouth below the corona. Prominent veins bulge on the visible lower corolla surface, in shade on the adjacent flower at the back. Corolla margins are entire, barring their five spiny lobe tips.

The stem surface on the left is very coarse with tubercles, the oldest ones usually having lost their spine-tips (White and Sloane, 1937; Shearing and Van Heerden, 2008; Le Roux, et al, 2005; iNaturalist).