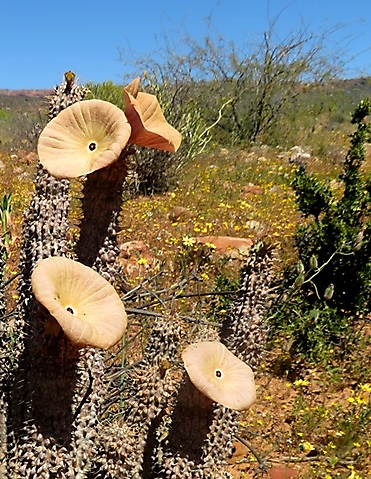 SKA and its worldwide scientific partners exploring radio signals from outer space were not the first to decorate Karoo landscape with satellite dish-like structures: Hoodia gordonii has been flowering thus for aeons. The flowers angled out and up mainly grow from upper stem parts.

Hoodia dishes may not be sensitive to radio or light waves, but draw flies like magnets. Not so much science may be in the making here, now or ever, for unravelling patterns in Hoodia scent signals received by flies, compared to the work being done on those from galactic sources.

Who knows whether flies are prettier or smaller than the beings from outer space that might be attracted by SKA efforts some day? Beauty is in the eye of the beholder, but what Jules Verne eyes and beholders are humanity still in for in the deep future (White and Sloane, 1937; Shearing and Van Heerden, 2008; Le Roux, et al, 2005; iNaturalist)?