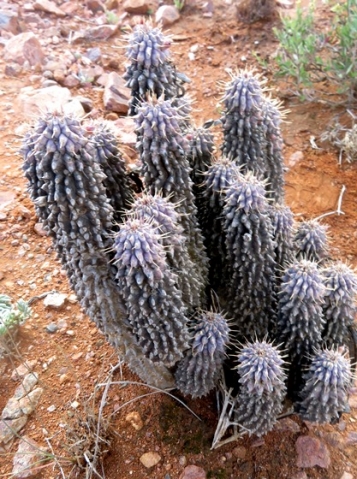 Hoodias are spiny stem-succulents growing few or many cylindrical stems in a clump. Branching is mainly from the base, the stems hairless but covered in more than ten vertical ridges of obtuse tubercles. Tubercle tips are sharp spines varying in hardness.

One to many foul-smelling flowers that attract flies are produced, usually opening successively, serving their pollinators over a prolonged season and giving themselves a good chance of setting some seed.

The hairless calyx is broad-lobed, the lobes overlapping slightly low down. The flat saucer- to shallowly cup-shaped corolla varies in size from 8 mm to 170 mm. It is lobed, hairless on both surfaces, but some are papillate inside, each papilla ending in a hair. There are two concentric coronas in the corolla, an often cup-shaped outer and five-lobed inner one.

There are 13 Hoodia species, only one of which is not from southern Africa. Hoodias grow in the Karoo, Little Karoo, Namaqualand, the Richtersveld, Namibia and Botswana.

The excitement of a short-lived spike of interest in a fat plant (Hoodia gordonii) making people thin, has died down a bit since the main pharmaceutical source of funds withdrew from the commercial project.

Still, these remarkable plants remain special among succulents of southern Africa. Meeting a Hoodia in the veld when badly in need of drinking water is a welcome moment for those that have learnt to trust and use it. And one may use Hoodia medicinally, if grandmother still remembers how and for what ailment.