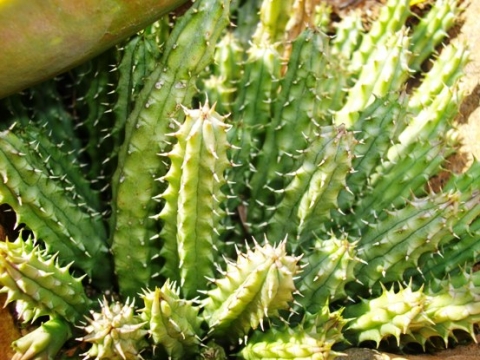 Previous
Image 3 of 24
Next

Hoodia gordonii is a spiny, leafless succulent that grows a branched clump of up to 50 cylindrical erect stems. The stems are blue-green to grey-green, about 5 cm in diameter and (occasionally) up to 1 m in height. Stem surfaces are covered in numerous vertical spiny ridges separated by sunken grooves.

The dominant flower feature is the nearly circular, lobed corolla, shaped like a shallow dish. The outer and inner coronas as well as the vital flower parts are quite small in the centre of the "dish". Flower colour is a pleasing beige or maroon with shade variations. Not so pleasing is the vile carrion smell of the flowers, resembling the stench of rotten meat. This clearly thrills the fly pollinators.

The cylindrical, paired seed follicles that follow the flowers taper towards the hooked beak-like structure at their tips.

The species distribution is in the Northern Cape, the north of the Western Cape and marginally in the west of the Free State, widespread across Namaqualand and the Karoo, as well as in southern Namibia.

The habitat is variable on stony slopes, flats and shale ridges in the open among arid, low-growing karoid scrub. The state of the species population in nature is uncertain early in the twenty first century due to insufficient data. The uncertainty arose from an intensive spate of plant collections, driven by notions of its putative value as an appetite suppressant; since abandoned (White and Sloane, 1937; Le Roux, et al, 2005; http://redlist.sanbi.org).