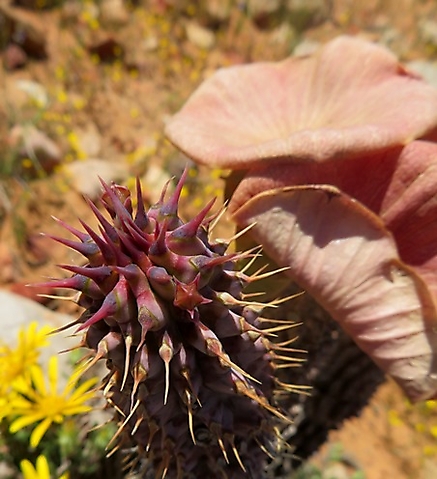 The small Hoodia gordonii beginning of a bud appears like an item one might find in the toolbox of a handyman, a tip of a drill bit rather than a flower to be. It would have had five spreading and acutely pointed sepal lobe tips along its perimeter, if some early mishap did not rob it of one tiny limb.

The star-shaped pyramid in the bud centre escaped damage as pyramids tend to do for long periods. Being live, this little pyramid will keep expanding much and flower normally in the absence of further interference. Current bud colouring is a modest shade blending well with surroundings. No shouting of invitations to herbivores is the prudent move, as Hoodia doesn't produce flower numbers like the Namaqualand daisies that don’t risk being wiped out by consumers although they're conspicuous.

The soft purple shades of the live spines at the stem-tip, perched on their tubercle bases are deeper than the bland colouring of the open flowers, outside or inside surfaces.

In this, the spring season of flowering and growth, more spines are sprouting from the centre of the stem-tip. The white to beige spines immediately below the stem-tip are thinner from having lost their juice but they still persist for now, no longer all straight (White and Sloane, 1937; Shearing and Van Heerden, 2008; Le Roux, et al, 2005; iNaturalist).