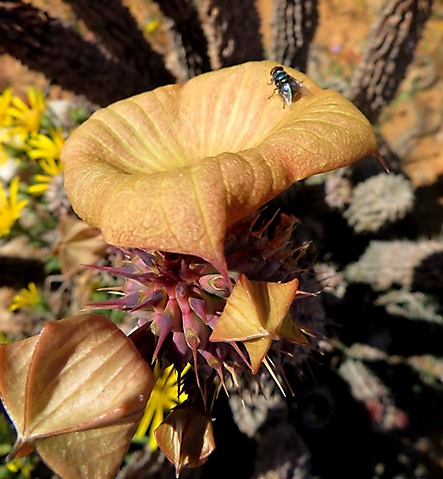 New growth at the branch tips of a stem succulent is always fascinating, Hoodia gordonii no exception. Fleshy, soft spines emerge up top, based on succulent tubercles that soon bulge. The tubercles become compressed laterally as they radiate from the centre, moving outwards, then turn from horizontal to vertical as the stem elongates.

Here the tubercles fall neatly in line on the vertical ridges of the erect stem, assuming position like troops forming up in columns. The stem ridges continue to ground level where the first tubercles to grow are still present. The soon to dry spines change colour from purple to beige, becoming thin from sap and youth loss.

A successful stem-tip is usually partly obscured in season by the flowers growing from among the tubercles. These stem-tip areas serve as entertainment centres and eating places for flies of all sorts, enjoying the sunshine while considering whether they can eat a little more.

The youngest flower does not necessarily emerge highest placed on the stem, but all the flowers grow from the upper stem parts (White and Sloane, 1937; Shearing and Van Heerden, 2008; Le Roux, et al, 2005; iNaturalist).